Holy Crap! Leilani is 18 months old today! I don’t even know where to start with her. The fact that she has been in our lives for a year and a half is crazy to me. We are so proud of the little girl she has become and we’re so excited for her future!

First of all, this is a super fun age. Her personality has really come through and she’s learning every second of the day. She has such a happy personality. Always smiling, laughing at the most random times. I’m not kidding, we can be driving home from daycare and she’ll just start laughing from the back seat and it’ll have me in tears by the time we get home because I’m laughing so hard! She is making all sorts of sounds now and she recently started ‘singing’ along to music.

A few things have recently ‘clicked’ with Leilani. One of the biggest ones is drinking from her sippy cup. She would hold it and try to drink from it all the time, but she wouldn’t tip it back/up so nothing would come out and she would get frustrated. Well, on Thanksgiving, we were at my MILs house and all of a sudden she just grabbed her cup and tipped it up and started drinking out of it. And then she did it with one hand, like a pro. I’m not going to lie, I had a proud mommy moment…with tears and everything. The next day at my parents house, while I was gone to the store, she climbed the stairs! This is a huge step for her! No pun intended.

She has definitely thrown a few tantrums, especially when she’s tired. You know what doesn’t help? Laughing at her…but I can’t help it when she sticks out that cute pouty lip and flops on the floor because you say no.

She had a bit of a rough day today. Not herself, crying at random times, pretty clingy, flush cheeks and really warm. Oh and sleeping a ton. Guess what? Her third tooth finally broke through! Yep, her third. And the weird part is that tooth #1 was her front bottom left tooth. Tooth #2 which just broke through about a week or so ago is her upper left…canine maybe? I don’t know, it’s hard to tell because she doesn’t have any front teeth up there and then this random side tooth. Well, the same spot, except on the upper right side is what broke through today. She’s going to look like a vampire with no front teeth! Poor little thing. I really wish she could just tell me what’s wrong or what’s hurting!

On that note, we have lots of words and actions that she is working on. Our birth to three educator is always impressed when she comes to the house once a month with her progress. She says: pop, up, mama, dada, hi, soup (sounds more like oop), hot, “I did it”, and I’m sure I’m forgetting some. She signs: milk, more, all done, please, thank you, baby, dog, cat, train, socks, shoes, and she tries really hard to say duck. She blows you kisses if you tell her you love her. She waves and so much more! She also can tell you where her head, belly and feet are. We are working on other body parts now like nose, mouth, eyes and ears.

She also does some fun ‘tricks’ that we taught her. If you ask her if she’s a crazy lady, she still puts her arms in the air and waves them back and forth. If you say ‘touchdown!’ she will raise her arms in the air. And last but not least, if you say chicken or chicken wing she puts her hands behind her head and moves them like wings. She likes to play Peek-a-boo Barn on my phone or tablet and whenever the chicken comes up she does this. It might be the cutest thing ever.

She’s been really focusing on feeding herself lately, which at times can be challenging since we still have to cut things up so small (c’mon teeth!!!). And she loves to be in the kitchen with us when we are cooking dinner. Sometimes I put her in a carrier on my back and she watches everything I do. Other times I’ll pick her up and let her put an ingredient in what I’m cooking. This is where she learned soup and hot. She gets to drop a bay leaf in whenever it’s called for and she absolutely LOVES it. She gets this proud little look on her face and it’s the cutest thing ever.

Her and the cat are still best buds, although I feel as though Romeo is growing tired of being tackled by the kid that now outweighs him. We have seen how fast she can ‘run’ after the cat too. He’s not smart enough to run away either…he slowly walks and she follows him everywhere.

Recently we bought Leilani a cute owl chair. It was supposed to be a Christmas present but she loves it so much I just can’t take it away from her. She climbs into the chair and hangs out with her toy remote. Sometimes it’s to watch TV and other times it’s to eat her snack. Other things she loves: dancing, bouncing on her trampoline, brushing her teeth, snuggling, pulling the handle off of my dresser, getting into everything and just being a regular little toddler.

She goes in for her 18 month checkup on December 21st, so I’ll update her stats then. We will probably do another blood draw to check her thyroid levels again and then I believe she only has to get them checked once a year after that. We will soon find out.

I’m so proud to be Leilani’s mommy. She still blows the statistics out of the water and she is such a fun little person to be around. She constantly makes me laugh and makes my heart feel like it’s going to explode out of my chest. I always want to remember these days and cherish them forever! 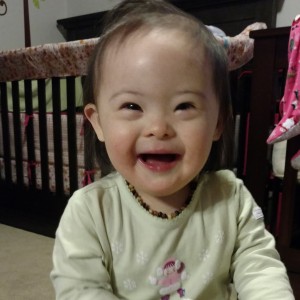 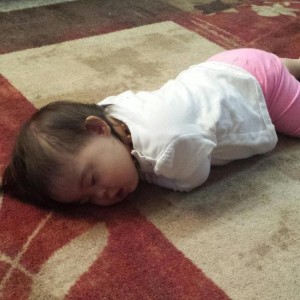 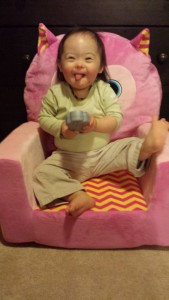 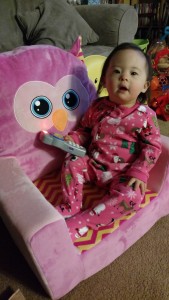 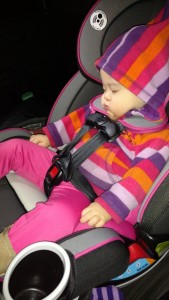 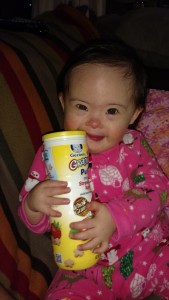