Well, it’s true – having your second baby is SO different than having your first. We’ve reached 20 weeks today (halfway there!) and I have exactly 4 pictures of my bump. At this point with Leilani, I was taking a picture almost every week starting at something ridiculous like week 5. But who has time for that now?? We also have nothing for this baby yet. I take that back, we have a few onesies and 1 small pack of newborn diapers. But since he will be sharing a room with us for a few weeks and then with Leilani until we get a bigger house, we aren’t able to buy a nice bedroom set for him like we’d like to. I’ve been searching for a crib that will fit in her room and trying to downsize some things so that we can fit all of her clothes and his in the same room! 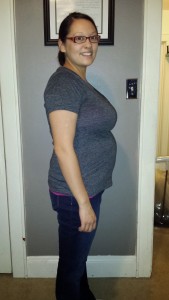 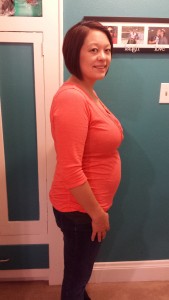 On Monday we went in for the big ultrasound, also known as the anatomy scan. Since we already knew that we were having a boy (since week 12), we got to focus a bit more on the measurements they were taking of him. He was very active and it took a while for him to cooperate with some of the measuring. At the end, the doctor came in and told us that everything looked great, but he did want to monitor the baby and have us come back in at 28 weeks since there was a tiny bit of extra fluid in the right kidney. He told us that this is common in boys and it’s just slightly more than they would like. Anything more than 4mm is more than they like and this little guy was at 4.25mm. He told us not to panic or worry and that normally this fixes itself and if it doesn’t, it would be something they would watch after he was born and may end up having to put a stent in, but that would be a lot further down the road and IF this didn’t clear itself up. So we went home and of course, what did I do? Worry. Because that’s what I do. So I asked my mommy group who had been through this before or if it was something they had heard of before. I got a few responses right away saying that it either happened to them or someone they knew and one (who does scans for her job) said that it was a really good sign that it was only on 1 side. So…I relaxed a little bit and I’m just going to look forward to seeing my baby again before he’s born. 🙂

Everything else is going well. I have been feeling lots of movement and having tons of heartburn, yay! And tired. Very tired. Trying to keep up with a 1 year old and being pregnant has proven to be a challenge. Why doesn’t anyone tell you how crazy it is?? Someday I’ll look back on this and laugh, if I remember what I was talking about…