I could hardly wait for Father’s Day this year. Last year I set up a surprise golf outing for my husband. He got hints and clues to guess what is was and where it was happening but he had NO idea who he was going with. Awesome right? The problem? I went into labor the night before (2 weeks before my due date). My husband was sleeping on the couch, because I was sleeping in a recliner at the time, and had literally fallen asleep for an hour or two and I had just fallen asleep when all of a sudden I felt a POP and ran for the bathroom. I called and called for my husband but he couldn’t hear me. So after a little while I went out to the couch and shook him a little and said, “Honey, I’m really sorry, but you’re not going to be able to go golfing. I think my water just broke.” What went from a little, “Huh?” turned into a “Wait…what?” And he was sitting straight up. On the way to the hospital I had to text the guys to tell them that golfing was off and that I was very sorry. LOL. I was apologizing for going into labor.

Anyway – I wanted to re-create that golf outing. Because even though Kevin couldn’t go, the rest of them still went and had a blast. So I sent a text to the others and set it in motion…in April. Ha! I really wanted this to work. I even said, “I promise not to go into labor this year. Lol! And no…I’m not. So don’t ask.” So we set the date of June 13th and when the guys showed up that morning Kevin had no clue what was going on. He had a great time even though it rained that morning and I think we have found a yearly event for them. So…that was present number 1.

Present number 2 was supposed to be surprise, but that got poo poo’d when the massage place called to try to switch the time of his massage. Ugh. At least he called me after he got that phone call to tell me that the surprise was ruined. We had a good laugh out of it. So actually ON father’s day, he got to go get a lovely massage with one of my favorite masseuses.

That concludes the presents from me. But I had to do something from Leilani! So one day, I put her in her chair and put some paper down, squirted some Crayola washable paint on it, covered it with some plastic and let her push the paint around. She was having so much fun doing it! And then I cut some paper to say Happy Father’s Day – Love, Leilani. I used red paper for that and I should have used something darker, but it was done so I just left it. 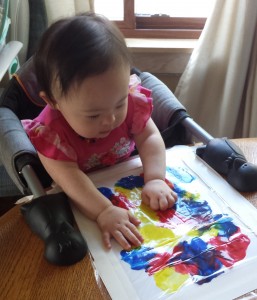 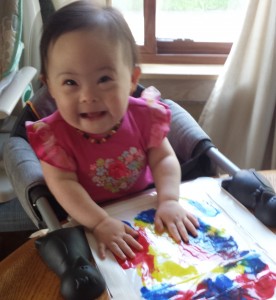 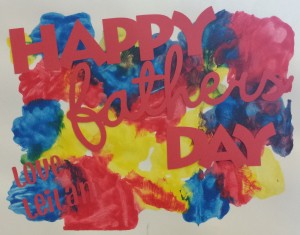 Next, we took a little trip to Target and JoAnn Fabrics and got our supplies to make Daddy a shirt. This shirt is so perfectly Kevin, I can’t even tell you. You have to just see it. We ended up giving it to him Friday night I think? Because I couldn’t contain my excitement and I figured he would want to wear it on Father’s Day. He said, ‘I’m gonna wear that with pride’, and did he ever. 🙂 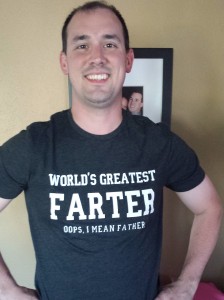 What an awesome Father’s Day. The weather turned out to be beautiful! Kevin went by his dad’s house in the morning with Leilani and then we went out for breakfast as a family, he got to relax and have a nice massage and then he took Leilani over to his Grandpa’s house where his Stepdad’s whole family was. I had to go to volleyball and then I met them after that. It was such a nice day and he was so happy. I live to see that beaming smile across his face. That is what Father’s Day is all about – celebrating the wonderful man, husband and father he is – and to show him how much we love him.