Lee Ann Leave a Comment on It’s been one week…

Since you looked at me, cocked your head to the side and said ‘I’m angry’…ok, just kidding. Yes, I’ve dated myself. When I hear “It’s been one week” all I think of is that song. You know, the one by the Barenaked Ladies?? You’re totally missing out.

Anyway, what I mean is…it’s been one whole week since I quit pumping! As of May 3rd, I’ve been FREE! It was a painful week and I was sort of forced into quitting, but it was the best choice ever! I wanted to stop exclusively pumping by the time Leilani turned 9 months, but when we tried to get her to drink the frozen stash I had built up, she didn’t like it. I panicked and tried a few different things, but in the end, mixing half and half and giving her 1 fresh bottle a day really helped us. She got used to it and we are now giving all frozen to her. Let’s start from the beginning.

I had every intention on breastfeeding and nursing throughout my pregnancy. There is a difference between those two terms, a difference I wasn’t really aware of until after I gave birth. Breastfeeding means you are getting your baby breast milk, either through a bottle or via breast. Nursing means getting them breast milk via breast to baby only. In the hospital, Leilani latched on well the first couple of times, but my milk had not yet come in, which was fine because she literally needed a teeny tiny amount of colostrum to survive. And in all of the testing that she had to endure the few days we were at the hospital and between all of the visitors, I never felt like I had time to try nursing her as much as I would have liked. People make you think that nursing is easy – and let me tell you…it’s NOT. You have to try different holds, it’s so uncomfortable and when people won’t get out of your room, how the hell are you supposed to learn?? I had a very difficult time and so did Leilani and she quickly grew impatient with me. The first lactation consultant that came to visit us was horrendous. I have no better word for her. Everything she told me I had to do made me angry. Don’t giver her a pacifier, use your finger instead – because I WANT to put disgusting germs in my brand new baby’s mouth, right? Everything she said made me question myself over and over and she didn’t help me whatsoever. That and she was super rude. When she left, Kevin and I looked at each other and we had no words. She was that awful.

The next day a new lactation consultant dropped by with someone that she was training. I was about ready to just say I didn’t want to see her but then she had a different aura about her. So I met with them. And boy was I glad I did. First of all, they had me try to feed Leilani right then and there so they could see what was happening! They saw how frustrated she was getting and they tried different things to see what would help. They tried a nipple shield which didn’t do too much because I was engorged and my milk had still not come in. But you know something? They kept calm and most importantly, they kept ME calm. No one tells you these things! They taught me how to get her to latch properly – seriously never heard of the ‘hamburger hold’ to get your nipple in their mouth properly! They also put a catheter through the nipple shield and pumped some formula through it so that there was instant gratification so that Leilani wouldn’t get upset when she was so hungry. I literally sat there and cried all the happy tears because my baby was finally getting fed and she was satisfied! I was so grateful for these 2 women!! They also had me pump at the hospital to try and get my milk to come in. It helped, but it still didn’t come in fast enough for my hungry baby. So we ended up giving as much as I could pump out plus some formula to keep her happy. The problem was that she didn’t gain enough weight fast enough so we had to start measuring how much we gave her, and when my milk did come in, it was super hard for her to latch on. So we started feeding her through a bottle, to be able to measure how much and to make sure she was gaining weight. Because then she became jaundice and wanted to sleep through feedings. Life kept throwing curve balls at us and we kept having to adjust. I tried for weeks to get her to latch, and it didn’t work for us. I was so jealous of others and sad for us. But then I found out that lots of women exclusively pump to feed their babies!

For those few weeks, it was a never ending cycle. She would be hungry, I would try nursing, she would get frustrated and cry, I would try harder and then I would end up crying. Then I would feed her a bottle, she would fall asleep, I would pump, then wash all the parts and then it would start all over again. I couldn’t keep up. So after talking with my husband, we decided that we would just bottle feed her the breast milk. I got a lot of crap from people for doing this (Like it was any of their business anyway). I felt like such a failure. I cried about it…a lot. And thankfully, I have the most amazing and supportive husband ever…because without him, I would have gone insane. If there is anything you take from this post, it should be this:

TRUST your instincts. Breastfeeding is WONDERFUL, but it’s not for everyone. In the end, all that matters is that your baby is getting fed.

Don’t listen to the haters. Because like they say, haters gonna hate.

So I exclusively pumped for my baby. And guess what? I was an over producer, so I not only fed MY baby, but I fed another baby as well. Baby R is a beautiful little girl and her mommy and daddy are wonderful people. She got 2,200 oz. of my milk and I couldn’t be prouder. We’ve all agreed to stay in contact so our little girls can grow up to know each other.

My goal was to be done at 9 months but I ended up going just a few days shy of 11 months. And we have enough milk in the freezer to get Leilani to well over a year. I’m very proud of this journey. It was TOUGH! I went from pumping all the time, even during the night, to 5 times a day for the majority of the time. Quitting a pump here and there felt like I was doing something wrong! But every pump was draining! I was so tired all of the time and I was ready to have my body back.

Here are some things that will help during your breastfeeding days.

If I think of anything else, I’ll add them.

So here we are, one week later. I feel great and I’m so happy that Leilani gets to have my milk for 1+ years! If I had to do it all over again, I would. Know that no matter what decision you make, you won’t be able to make everyone happy and it doesn’t matter. As long as you and baby are happy and healthy, that is what matters.

p.s. You get really good at pumping and bottle feeding at the same time 🙂 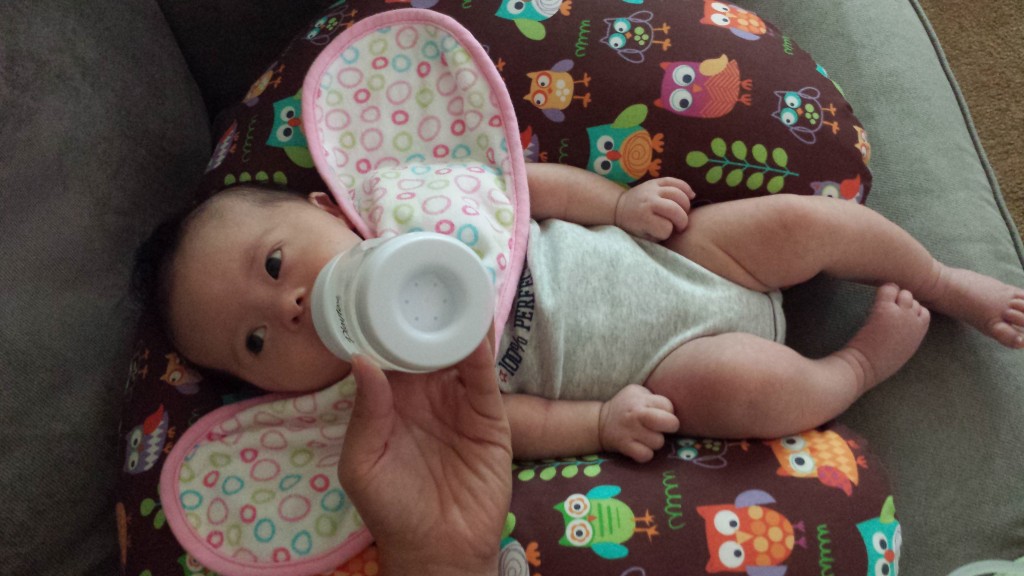