Lee Ann Leave a Comment on Officially in the Third Trimester 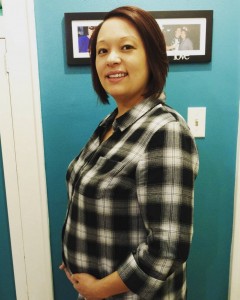 Today I am 28 weeks, which is officially the start of the third trimester. That’s so exciting and scary at the same time! The last trimester was when it started to get rough when I was pregnant with Leilani. You get so much bigger (and everyone comments on it), your ankles swell so much it looks like you have elephant feet, my legs cramped all the time, the water weight increased and I couldn’t fit my ring on my finger anymore, sleep was terrible, it was hard to breath, every way I sat was uncomfortable, and so much more. But the worst for me was the pinched nerve in my neck. It just happened one day. I went to a masseuse and it didn’t help, it got worse. I was in tears from the pain. I was going to see my masseuse every other week, a chiropractor every week and nothing helped. My husband would literally have to rub Biofreeze on me every night and I was sleeping in a recliner because of it. He was sweet enough to sleep on the couch near me just in case I needed him. I literally don’t have full feeling in my left thumb still. My office at my job was so hot all the time that I was just miserable day in and day out. False labor at 36 weeks made me cry because I was so ready to be done being pregnant but they wouldn’t let me have that baby! And then my water broke and she came almost 2 weeks early. I’m hoping for 2 weeks early with this kiddo too. Let me tell you why.

I had an ultrasound on Monday. It was a follow up to the 20 week scan when they noticed that baby boy had a little bit of extra fluid in his right kidney. His kidney looked great this time but the tech and the doctor scared me to the point of an almost panic attack when they told me that this boy was BIG. And the looks on their faces…it was horrifying. Why would you tell a mother that?? Why not tell my doctor this and let her handle it? Apparently, this kid is almost off the charts, he’s measuring almost 3 weeks ahead and they are estimating that he weighs 3lbs. 3 oz. already!!! I had to talk myself down. I get it, maybe I just make big babies. Leilani was almost 2 weeks early and weighed 8lbs. 2oz. But I guess since I’ve never had such a late ultrasound, I had no idea what to expect. Maybe Leilani would have measured big too. Ugh. Whatever. Thank God for my mommy group, yet again. They all talked me down. Some were told that their babies were going to be big and they ended up not being that big, etc. etc. Anyway, maybe someone should tell the techs and doctors that they shouldn’t scare the moms with talk about size. Cause I’ll be damned if I’m going to try to push out a 10lb. baby!!! Ouch!

I did get this adorable picture of our baby boy. His lips and cheeks are so squishy, I just love it! I’m getting so excited to meet him! So cross your fingers for me that he’s not too huge, and if he is on the bigger side, let’s hope that he is like his sister and can’t wait to come out!