Ok, maybe not my WORST nightmare, but pretty damn close. I have to be dairy free. Ugh!

We went to see the pediatrician on Monday (April 25th) for a little rash on Leilani’s face and while we were there, I asked about reflux and what we could do for Landon because he’s been fussier, arching his back, super gassy, crying more, spitting up a ton, etc. (all things that pointed to reflux). And do you know what she said to me?? She said, “At this point we tell you to cut out all dairy for 2 weeks to see if there is an intolerance or allergy.” I almost burst into tears. I think the words that came out of my mouth were, “There is no way I can do that.” If you know anything about me, I absolutely LOVE cheese. Like…my nickname has been Mouse since I was 4 because I ate so much cheese!!! I literally have been enjoying slices of cheese and crackers for my snack since I’ve been home from the hospital. And then a couple of weeks ago, there was a cheese show in Milwaukee that my dad attends every time it’s here and he brought me a block of blue cheese that was sitting in my fridge and that is ALL I kept thinking about! And there you have it. I was now a dairy free person, at least for the next two weeks.

Do you know how hard it is to go completely dairy free, just like that? No milk, ice cream, butter, sour cream, yogurt, CHEESE?? Try it sometime. Or just look at all of the ingredients in everything you eat. Things that you wouldn’t expect would have milk or dairy in it, does. Like Mexican Rice – really?? And when someone tells you that you can’t have something, you want it even more. Every time I went to the refrigerator, I’d open up the drawer with all the cheese and almost eat some. I needed to go shopping fast and find some non-dairy options. Not a ton of non-dairy items at the regular grocery store. I went to Pick N Save, Sendik’s, Trader Joe’s and Whole Foods. I found non-dairy butter (that actually doesn’t taste bad!), non-dairy cream cheese (it’s just meh), rice milk, lots of snacks (like hummus and guacamole), non-dairy coconut milk yogurt (to substitute for sour cream), non-dairy cheese (yikes! don’t try it unless you have to or someone is paying you – it is NOT good) and then my MIL found non-dairy Ben & Jerry’s ice cream – which actually tastes pretty awesome! I was going to do this!

On May 5th, I called the pediatrician. There was no change at all. So they prescribed .5 mL of ranitidine (Zantac) and said the dreadful words ‘the doctor would still like you to be dairy free’. We started the meds that night. We started to see a minor difference in Landon’s reflux, but not much. The medicine seemed to mask the pain for him for a little bit, but he was still in pain. On May 11th, we went to see the ENT (Ear, Nose and Throat specialist) to get his tongue tie checked out. We met with a very nice doctor and he was very honest about whether or not this could help or if it would make no difference at all. The choice was all on us. We decided to get it clipped since it was such a simple procedure and he would be done within minutes and not have to be sedated. They took him, hyped him up on some sugar and then clipped his frenulum and he was back in my arms in no time at all. He cried for a few seconds and then he nursed and fell asleep. I felt the difference the first time he latched on. What a crazy feeling! I could nurse my baby and not be in pain. That night was rough though, let’s be honest, because he wanted to nurse like every hour. But every time he nursed, he seemed to heal a bit more. By the next day, he was doing great and it didn’t seem to bother him at all. While we were there, they told us to increase his medication, according to his weight, to 1.4 mL to see if that helped. (My baby weighed in at just over 12 lbs. with his clothes on – holy crap!)

So we started him at 1.4 mL right away. So far, there has been a huge difference. He sleeps better, he eats and then falls asleep. Before, he would have painful cries after eating and spit up when he burped, or cry and push out farts. The only thing that changed for the worse was his pooping. He went from that Wednesday until Sunday before he finally pooped – after that he’s been like a new baby! He is so different now! He has been sleeping so good and eating well and he has started to coo and smile at us! One of my favorite things is still when he laughs in his sleep. You have to wonder what goes on in their head sometimes. Anyway, there seems to be some light at the end of this tunnel. The only problem is that I still have to be dairy free. I will find out hopefully by the end of this week if I can go back to eating some of my favorite things or not. Cross your fingers for me!

*Side Note: Going out to dinner has been super tough. Most places are pretty accommodating, but knowing who has dairy free options before going to the restaurant has made things a bit easier. I’ve been using the Go Dairy Free website a lot. It has been a great resource!

*Another Side Note: Did you ever notice how ‘cheese sells’ is equivalent to ‘sex sells’ when it comes to marketing??? I mean seriously, if I see another commercial about a burger being ripped in half with yummy ooey gooey cheese stringing out I’m going to go crazy! 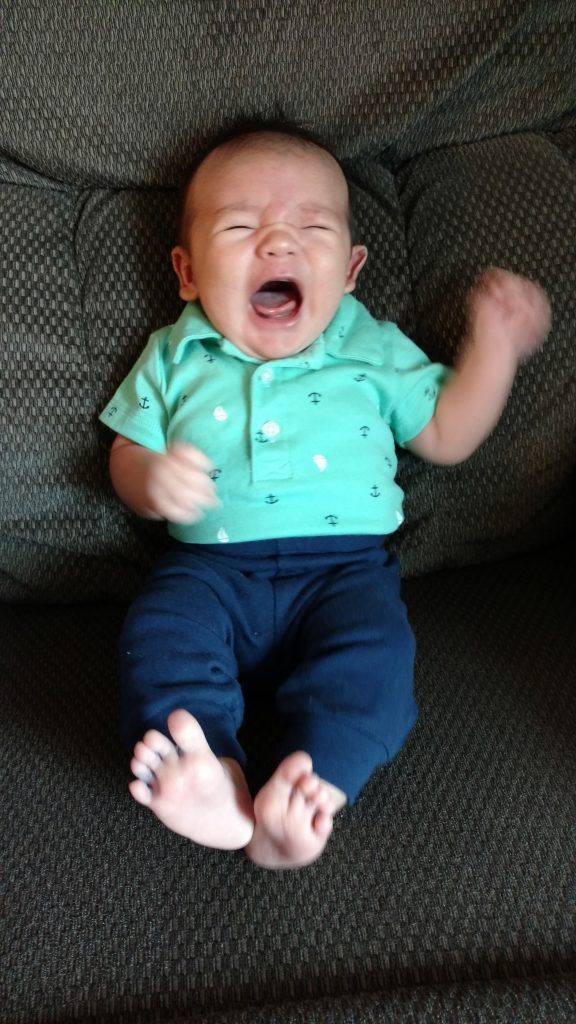 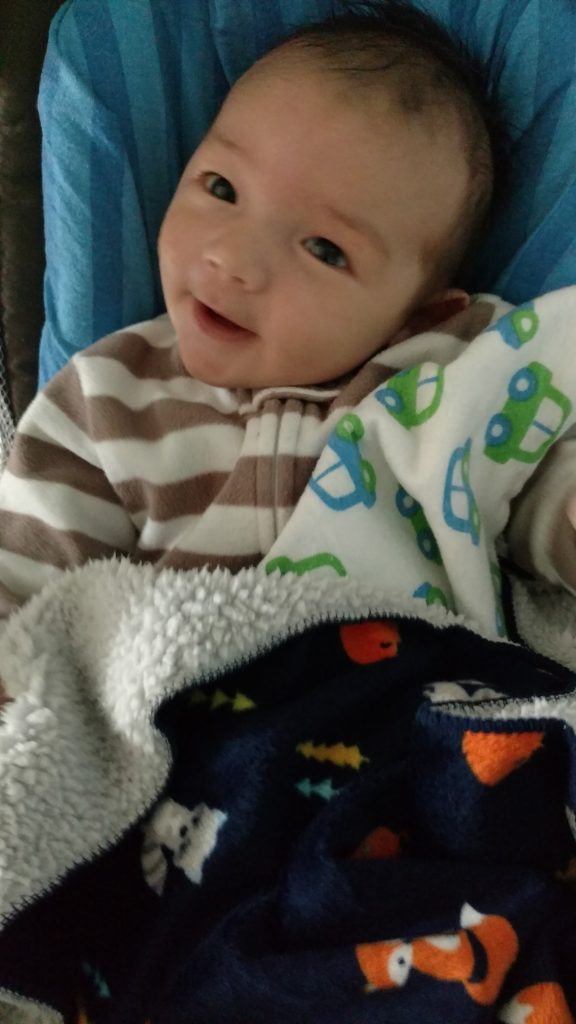 A little ‘before and after’ we increased his medication. LOL.