Sounds like a video game or something right? Maybe to someone that doesn’t have babies. This thing, this Rock N Play, was a lifesaver! There are many different ones out there so I can only attest to the one we have (which is the Graco Little Lounger Rock N Play) but I’ve heard good things overall. First, let me say that this one was tested before we used it on our newborn. As you can see here, it passed the test. 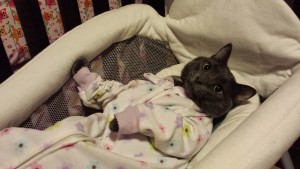 We knew that we were going to use this instead of a bassinet once we brought our bundle of joy home from the hospital. So for the first 4 ½ weeks, this is where she slept, next to me on my side of the bed. Leilani slept great in it and it was the perfect height to be right next to our bed so I didn’t have to go far to get to her in the middle of the night. It also has a vibrate feature and seriously…the new ones have a rocking feature…WHERE WAS THIS WHEN I NEEDED IT? I’ve also heard that if your baby has reflux, it helps when they sleep at a slight angle, which is exactly what the Rock N Play does! I dragged that thing everywhere…into the living room, back to the bedroom, into the kitchen, etc. etc. During week 5, we switched her to her crib and the Rock N Play was just for naps. Even if we only used it for 4 weeks…it was totally worth it! It does have a buckle in it that you can use and you can literally use this until they start pulling themselves up, which at 9 months, my baby still doesn’t do! It folds nicely so it’s easy to store, doesn’t take up a ton of room and it’s really portable. We took it with us when we went camping even! 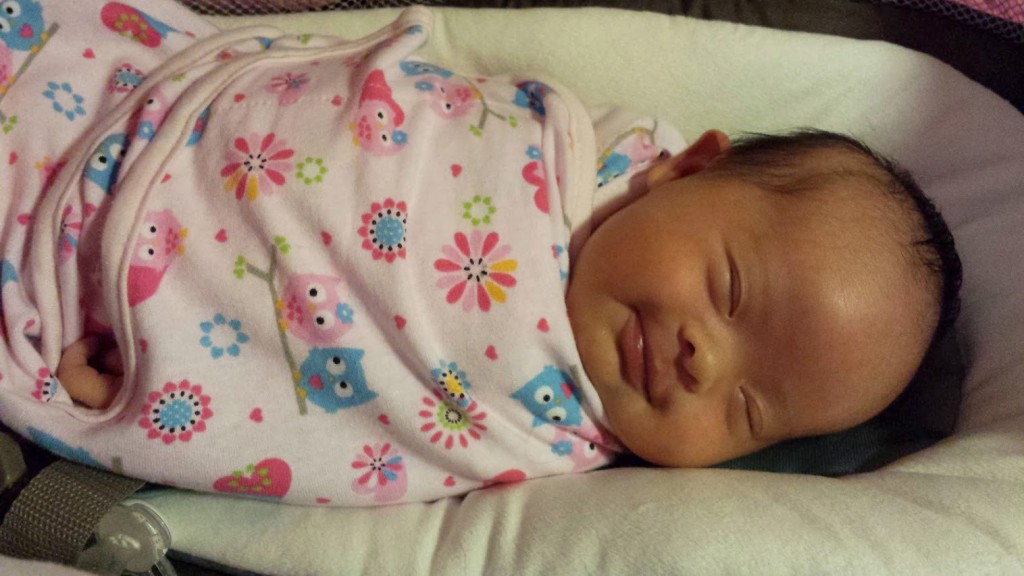 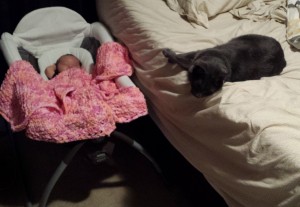 The photo on the left is the first smile we caught on camera (at 2 weeks old) – and the one on the right is her next to my messy bed and Romeo guarding her.

Bottom line – get a Rock N Play – whether it rocks itself or not, it’s totally worth the money!!!